My work is fundamentally collaborative, and I collaborate across disciplines with other scientists within my institution, at institutions around the world, and with local and state government agencies. My greatest collaborators, however, are my students. Read below about the many people with whom I am privileged to work. 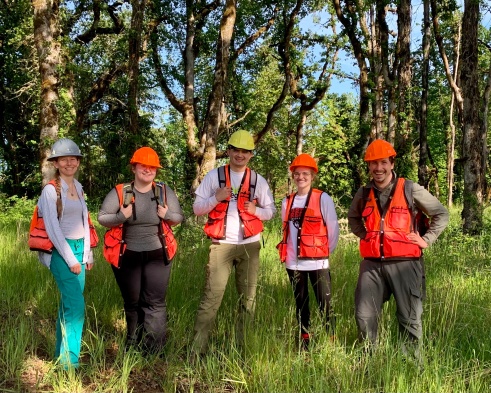 Jessica Chong (BS) – Jessica is a BS (Biology) student at Western Oregon University interested in medical entomology. She leads the invertebrate studies in my lab, and is focussed on understanding the responses of invertebrate communities to Gary Oak habitat restoration. This involves hours of field work and microscope identification, both of which Jessica excels at!

Anastasia Popchock (BS) – Anastasia is a BS (Biology) student at Western Oregon University interested in ecology. She is currently working on an analysis of insect herbivory damage of Gary Oak acorns and how that damage impacts germination success of acorns. She is currently writing up the results of an experimental test of the “float test” method used in habitat restoration of oaks, and how that is impacted by insect damage. Anastasia is co-advised by plant eco-physiologist Dr. Ava Howard.

Madison Smith (BS) – Madison is a BS (Biology) student at Western Oregon University interested in fish and wildlife management. She is currently conducting a spatial analysis of invasive common snapping turtles in Oregon, and is co-advised by Dr. David Szpakowski in Earth and Environmental Science.

Emil Ricci (BS) – Emil is an Honours Biology (BS) student at Western Oregon University. He is

conducting his Honors thesis in my lab on designing and investigating the efficacy of a new type of basking platform to be used in turtle habitat restoration at Minto Brown Island Park in Salem, Oregon. He has previous conducted numerous basking surveys and analyses of camera trap photos of turtles.

Misha Pierce (BS) – Misha is a Biology (BS) student at Western Oregon University and has been working since 2020 on the development of the Oregon Turtles community monitoring app and an analysis of “citizen science” in general. They are co-advised by Dr. Lucas Cordova in Computer Science.

Connor Park (BS, 2022) – Connor’s research focussed on the use of automated audio recorders to investigate bird community diversity in the context of Gary Oak habitat restoration. He is currently working at Peak Plant Genetics. He was co-advised by Dr. Ava Howard.

Shayla Solomon (BS, 2021) – Shayla was a founding student on the Oak Ecology Research Team, and

led the invertebrate work (field work and lab identification) for two years in my lab. She is now working on a Masters degree in biomedical sciences.

Oswaldo Moreno (BS, 2021) – Oswaldo was a founding student on the Oak Ecology Research Team, and led the investigation of acorn insect herbivory for two years. He is now applying to medical school. Oswaldo was co-advised by Dr. Ava Howard.

Samantha Sackett (BS, 2021) – Samantha was a founding student on the Oak Ecology Research Team, and led the investigations of bird community diversity in Gary Oak habitats for two years. She was co-advised by Drs. Ava Howard and Jeff Snyder.

Henry Roberts (BS, 2021) – Henry was a founding student on the Oak Ecology Research Team, and led the investigations of tree physiological responses to habitat restoration for two years. He was co-advised by Dr. Ava Howard.

Blake Looney (BS 2020, MEd 2021) – Blake’s research focussed on the effects of human recreation on reptile abundance and diversity at an urban park, in collaboration with Dr. Ashley D’Antonio at Oregon State University. He is currently a high-school biology teacher.

Eliza Thompson and Naomi Cullinan (2017) – Eliza and Naomi were undergraduate students at the University of Melbourne who worked with me on understanding the behavioural responses of crickets to light pollution. Their work was published in Animal Behaviour in 2019. They were co-advised by Dr. Therésa Jones

L. Michael Botha (2016) – Michael was an undergraduate Honors student that I co-advised with Dr. Therésa Jones at the University of Melbourne. Michael’s project involved examining the impacts of artificial light at night on cricket mating behavior. His work was published in Animal Behaviour in 2017.

Jasmine Maftei-Muirson (2017) – Jasmine was an undergraduate student that I co-advised with Dr. Craig Williams at the University of South Australia. Jasmine worked with me on an investigation of salt tolerance of the common Australian frog Crinia signifera. Her work published in the Journal of Herpetology in 2020.

Austin Spence (2016) – Austin was an undergraduate student in Dr. Susannah French’s lab while I was a graduate student at Utah State University. I co-supervised him on an independent research project investigated the effect of Zinc-Oxide nanoparticles on rough-skinned newt embryonic and larval development. His work was published in 2016 in the Journal of Experimental Zoology A. He is currently a postdoc at the University of California Davis. 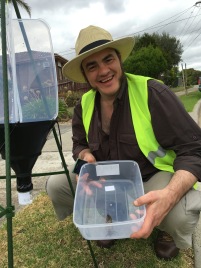 of BioSciences at the University of Melbourne, both co-supervised by myself and Dr. Therésa Jones.  His work investigated the effect of different lighting technologies on the abundance and diversity of invertebrate communities in urban ecosystems, and the impacts of artificial light at night on trophic cascades and community ecology more generally in psyllid-eucalypt-bird food webs in Australia. His work has been published in the Journal of Applied Ecology  and Environmental Pollution.